I was at the local Barnes & Noble the other day picking up a birthday present for my sister and, while there, decided mosey over to the science section to see if they had any copies of my book. What to my wondering should appear, but a paperback edition of Discovering the Mammoth. It looks very nice. I bought a copy to show people and took it to dinner at my corner brewpub. While I was showing it to some of the regulars, two young women from Seattle asked about it. I ended up selling it to them and autographing it with a cartoon of a mammoth in the snow. 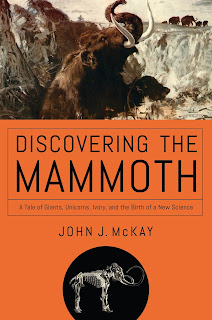 The hardback was paid for by an upfront advance that was gone by this time last year.* For this edition, I'll be paid with royalties that will come twice a year. I don't expect more than a few hundred dollars per check, but it will be a nice little bonus when each arrives.

* That's why I was begging all year, hunting for work, and too depressed to write. Last month, I started receiving Social Security which, while not enough to make me completely independent again, has taken a lot of weight off my shoulders. I've already begun writing again and will have some things for the blogs very soon.
Posted by John McKay at 2:28 PM 2 comments: