Indiana Jones and the Big-Ass Disappointment

What a story. Inside one of the most famous tombs in Egypt, archaeologists discover a hidden tunnel carved into the raw stone of a mountain. The tomb of Seti I had been known for over a century when archaeologists discovered the entrance to the tunnel in the 1960s. After removing over three hundred feet of rubble from the tunnel, the diggers gave up without reaching the end or discovering the purpose of the tunnel. It's now fifty years later and the Egyptians are trying again. They have removed another two hundred seventy feet of rubble only to discover that the tunnel leads to... nothing at all. The tunnel, they report, is different that the rest of the tomb. While the tomb of Seti I is famous for its colorful murals, the tunnel is almost devoid of illustration. On of the only inscriptions reads "move the door jamb up and make the passage wider." It took us a half century to discover that the secret of the tunnel is that it is unfinished. 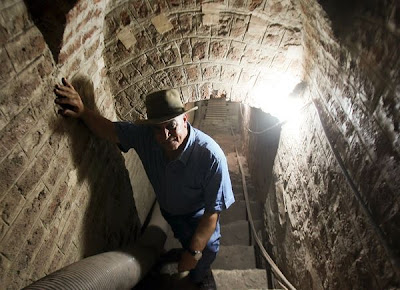 Return of the Killer Mastodons

Charles Stuart Cochrane seems to have been a bit of an eccentric. He came from a well known military family. It was his father, the admiral, who ordered the bombardment of Ft. McHenry while Francis Scott Key, imprisoned below deck, wrote The Star Spangled Banner. After doing his part in the Napoleonic Wars, young Charles took leave of the navy to travel across the newly independent country Colombia scouting out economic opportunities. He attempted to drain Lake Guatavita looking for the gold of El Dorado and recommended copper mines and building a canal across the isthmus of Panama as future projects. Cochrane's memoir of the journey include the first description of the poison arrow frog. After the memoir was published, he picked up a guitar and wandered Great Britain for a year as "Senior Jean de Vega, a Spanish minstrel." The neighbors may have thought him "a little cracked" but that didn't stop him from making a tidy fortune by inventing a superior loom for weaving cashmere. 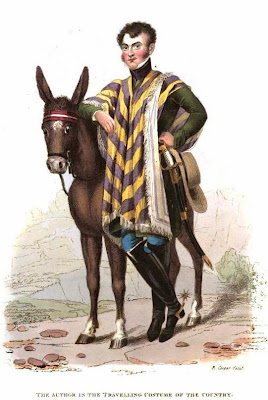 Cochrane earned a comfortable, if small, place among nineteenth century traveler-explorers. His memoir includes important historical and naturalistic observations that are still quoted today. However, what drew my attention to him was an observation that hasn't received the attention it deserves. Heading west from Bogotá, he stopped for several days in the town of Cartago.

Jan. 12, 1824. In the evening made an excursion with Señor Zereso, Don Luis, and others, to a small hill commanding the town; when, the evening being tolerable, we had a fine view of a ridge of mountains, which divides this valley from the Pacific Ocean: their summits are entirely covered with snow. The smoke of a volcano is to be seen, which is situated on the other side of the summit of the mountains. From a small chain of hills, near to this range of mountains, with a good glass, have been seen numbers of the carnivorous elephants, feeding on the plains which skirt these frozen regions. Their enormous teeth have occasionally been seen: but no one has yet succeeded in killing one of these animals, or, indeed, in getting near to them. There are great quantities of wild cattle in these plains...

I've written about the idea of killer mastodons before. Their teeth are significantly different from those of mammoths and living elephants. Eighteenth century naturalists believed those differences indicated the mastodon was a meat eater. This idea had largely been abandoned by the time that Cochrane wrote but, obviously, still had some partisans. The more interesting question is, what on Earth were his hosts talking about? What animal had they seen on the neighboring plains that they thought fit the description of a killer elephant? I have no answers, but, if it is still out there, I hope we don't do anything to piss it off.
Posted by John McKay at 12:21 PM 1 comment: