While hunting for some old images of moeritherium, I came across this: 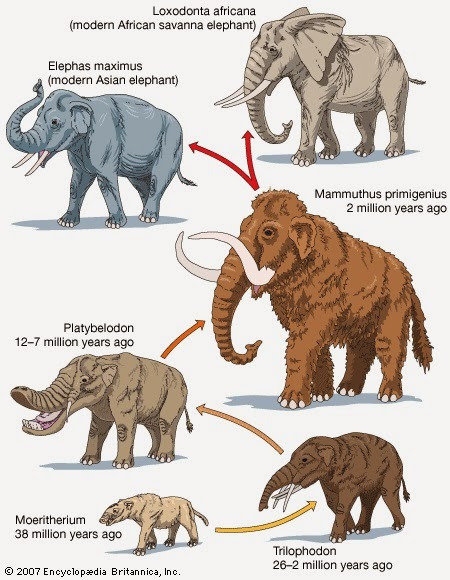 Everything on it is wrong. Admittedly, the order Proboscidea has a big bushy family tree and many of the lineages and connections are the subjects of active controversies. But this goes beyond valid controversy; it's just wrong.

Starting at the bottom.

The genus Moeritherium is not the ancestor of any later proboscidean species. Though it had a nice long run of its own (almost twenty million years) and produced about a half dozen species, it was a side branch that ultimately left no descendants. When Charles W. Andrews unearthed the first Moeritherium at Fayum, Egypt in 1901, the oldest known proboscidean fossils were gomphotheres from the early Miocene. His discovery pushed the history of the order back to the earliest Oligocene--ten million years, but they didn't know that yet. It was an easy jump to make from earliest elephant to ancestor of elephants and Andrews announced his discovery that way. However, additional discoveries by him and by others soon raised questions about that conclusion and most Twentieth Century paleontologists were content to call it a cousin.

Trilophodon isn't a recognised genus or species at all. The word was coined in 1857 by Hugh Falconer to describe a sub-genus of mastodons that included the American mastodon and about half of the family that later came to be called gomphotheres. The other half, he called Tetralophodons (the terms describe an element of tooth architecture). The words are used today as adjectives, not as formal names, for different types of gomphotheres. The illustration is probably supposed to be Gomphotherium angustidens, the most common and best known Old World gomphothere.

Depending which species the Britannica artist had in mind, they might have managed to get the relationship somewhat right with Platybelodon. It is a trilopodont gomphothere. It produced the final species of the sub-family Amebelodontinae.

Mammuthus primigenius, the woolly mammoth, is not the ancestor of modern elephants. In fact, it didn't evolve until long after the three surviving elephant species had reached their current forms. The idea that it is an ancestor originated in the earliest days of paleontology, before evolution or the ice ages were understood or accepted. Johann Blumenbach, who first recognized that mammoths were different enough from modern elephants to need a unique scientific, name thought of them as a less refined local breed of elephant and named them Elephas primigenius - the primal or original elephant. It didn't take long for naturalists figure out that the mammoth was different enough to need its own genus - Mammuthus. Outside of creationist literature, I'm not sure where you would find a source that claims mammoths are ancestral to elephants written since the 1880s at the latest. Plus woolly mammoths weren't that large. While they weighed as much African savanna elephants, they were much more compact, shorter and thicker.

To sum up: four relationships that are wrong, one species that never existed, one in the wrong chronological order, one visually incorrect (in size), and Asian elephants aren't blue. A correct illustration should look something like this: 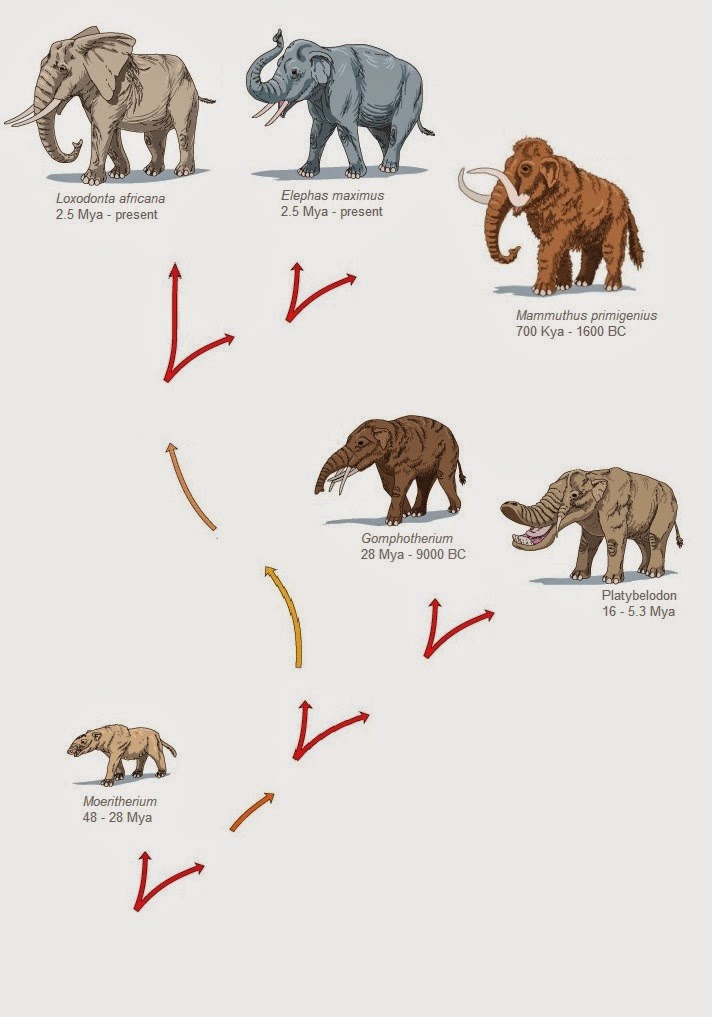 When did Britannica become so sloppy?

UPDATE: An editor at Britannica just tweeted me to thank me for bringing the problem to their attention and to say they'll get right on fixing it. My faith is restored.
Posted by John McKay at 8:00 PM No comments: