Amazons on a map

While reviewing some of the illustrated maps I used for the book, I've taken to hunting for Amazons. This group is on the Pierre Desceliers 1550 map of the world. The map was probably commissioned as a gift for Henry II of France. 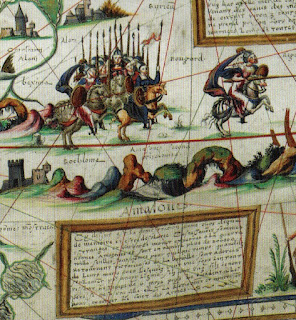 Amazons
Above is the illustration of a thing worthy of memory and of being described, that is, strange and barbarous women who are experts at war and who are called Amazons. They number about 200 million, alone without men for some time. When they return victorious from battle, they are loved by their husbands with whom they go only once a year, and only to have children. If they have a son, they nourish him for six months and then give him to his father; if it's a daughter, they keep and raise her to train in feats of arms.


According to map historian Chet van Duzer, the text likely comes from an edition of Ptolemy's Geography published earlier that century (he mentions four possible contenders). As was the case with illustrated maps of that century, the placement of decorations on Descelier's wasn't random. Mapmakers were trying to make sense of a new discoveries coming in every day. Monsters, new animals, foreign monarchs, and historical events were placed in their approximate correct locations.

The Amazon army on this map is shown north of the Caspian Sea marching westward toward "Region de Mithridates." This mangles two Amazon legends together and mis-locates the kingdom of Mithridates, but he deserves points for trying. He is attempting to make sense of contradictory ancient sources and integrate them with new discoveries. Central and Northeastern Asia, despite bordering the Old World civilizations remain badly understood for another two centuries.

NOTE: I earlier wrote about this map and my reasons for studying it here.
Posted by John McKay at 8:31 PM 1 comment:

My publisher, Pegasus Books, has released their summer catalog for next year and guess who is in it? This means it's starting to show up on the pages of Amazon and other fine booksellers. When I pointed this out on Saturday, some of my friends went pre-ordered copies. This gives it a sales ranking in the Amazon system and, as of today, it is the #1 New Release in Science > Fossils.

I worked at Elliott Bay for three years. I hope I get to do a reading there. If you have a favorite independent bookstore that you'd like to give a shout out to, mention them in the comments.
Posted by John McKay at 5:18 PM 2 comments: