How cool are woolly mammoths?

Consider this: The current New York Times Magazine has an article by Nathaniel Rich on de-extinction--the idea of using genetic tools, such as cloning, to revive extinct animals. It's a very interesting and well thought out article. The hook for the article is the story of Ben Novak, an man who is obsessed with passenger pigeons. Throughout the article, the example of the passenger pigeon is used to discuss the challenges, the ethical issues, and the possible environmental impacts of recreating an extinct species. How did the editors decide to present this story? Naturally, they turned it into a mammoth story. The title is "The Mammoth Cometh." Two of the six illustrations are of the mammoth model in the Royal British Columbia Museum in Victoria. Only one is of a passenger pigeon. Of the three quotes in giant fonts, one refers to mammoths and one to passenger pigeon. In Rich's 6600 word article, the word mammoth appears sixteen times, usually mentioned only in passing. The first mention isn't until the seventh paragraph.

The simple fact ie the public loves mammoths. Mammoths sell. It's almost impossible to publish a story about the end of the ice age or pleistocene extinctions without wrapping it in mammoth packaging. The public is hungry for new information and stories about mammoths. And I have them. That is why someone needs to publish my book and give it a big marketing campaign.
Posted by John McKay at 1:18 PM No comments:

Mammoths in the News

Oh, look. Someone found a tusk about five minutes from where I used to live. 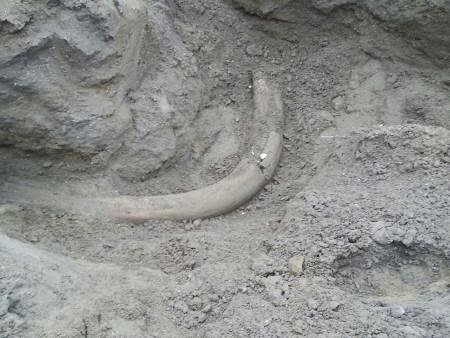 It's almost certainly not a woolly mammoth. No woollies have been found west of the Rockies. It's either a Columbian mammoth or a mastodon. If I was there I could tell them that. Instead, I'm here wallowing in self pity. Snif.
Posted by John McKay at 1:55 PM No comments:

Most orca populations around the world have low genetic diversity, which can present a conservation problem for those populations. A new genetic study finds that one population is fairly diverse. These two facts might help us better understand the effects of climate on ocean systems.

First the Orcas. Researchers from Durham University in the UK conducted a genetic study of orca populations around the world. What they found was that most populations have very low genetic diversity. What does that mean? It means the members of each group are fairly closely related. This happens when a species goes through a genetic bottleneck. That is, most of the species died off and later generations are descended from the few survivors. Since we became fully human, our species has done this at least once. It might explain how we separated from our sibling species such as the Neandertals.

Over time, new mutations will appear in a population's genome creating new diversity. By assuming the existence of a genetic clock--that is, a steady rate of mutation--it's possible to estimate when a population passed through a bottleneck. Naturally, it's a lot more complicated than that, but that's the gist of it. The importance of the current study is that the genomes of various orca populations around the world show they all went through a genetic bottleneck about 40,000 years ago. All except one. The orca population off the coast of South Africa has a high level of genetic diversity, suggesting they maintained a large population through the event that cut back all of the other populations.

In naming that event, the Durham researchers point an accusing finger at the last ice age. That works pretty well. An ice age doesn't just mean a lot of ice up north and down south; it means the whole global climate changes. If you've learned anything about the current climate crisis, that should be it. Global warming doesn't mean it gets a little warmer every year; it means entire patterns of climate change. For the orcas, what we're concerned about is ocean currents. Increased cold in the far north and south doesn't sound like something that should hurt orcas. After all, most of us think of orcas as cold water animals. But it can hurt them a lot.

Just as with land climate, the ice ages didn't merely chill the water in the north and south; it changed circulation patterns all over the globe. To grossly simplify things, there are two patterns of ocean currents: one on the surface and one in the deeps. In a few places around the world the two connect. At one end, surface waters get cold and heavy and plunge into the deep. At the other end, the waters of the deep run into a continent and are pushed back to the surface. These upwellings bring nutrients to feed the small organisms that are the base of the entire ocean food chain. There are other sources, such as river mouths, but the upwellings create enormously fertile ecosystems.

The Durham researchers point out that most upwellings were disrupted or completely collapsed during the ice ages. The one that didn't was the Bengeula upwelling near South Africa. That fact pulls it all together. Less food at the bottom of the food chain means less food at the top of the food chain. As apex predators, orcas are very sensitive to disruptions at the bottom of the food chain. Only the South African orca population had sufficient food to make it through a bottleneck that affected orcas everywhere else. For future research, the Durham team suggest looking at other apex predators to see if they experienced a similar bottleneck.

I'd like to suggest another line of research. Climate and weather don't move in straight lines, they seesaw. The weather gets cool for a few years then it gets warm for a few years. This is not a smooth cycle. Lately, both the colds and warms have been getting warmer. The direction of these cycles has been getting warmer for the last 150 years and the speed upwards has been increasing. The seesaw is moving up, rapidly. In a scale of thousands of years, climate works in bigger seesaws. In the scale of your lifetime, the weather seesaws up and down. You might not even notice the pattern that is climate. On a scale of centuries, those seesaws form an even greater seesaw that helps historians understand the rise and fall of civilizations. One more step up and it gets interesting.

There wasn't just one ice age. Ice ages come in sets. What caused the ice age is an incredibly complex question. Roughly put, first the earth has to be in a state where ice ages are possible--the continents must be in the right shape, the mountains must be the right height, and the air must have the right chemical composition. Even then, a series of astronomical cycles determine whether an actual ice age happens. In the current period, we have had around nineteen ice ages (called glacial maxima (maximums)). Finally, when all the conditions are just so, it usually requires a nudge to tip the first domino. We are in a period in which ice ages are possible, but the seesaws within seesaws in and out of glacial maxima do not form a regular curve up and down. From a warm period (called an interglacial), such as the one we are in, the climate seesaws down to the coldest period, then rather abruptly (in geological terms) jumps up into the interglacial climate. Right now we should be seesawing down into the next glacial maximum; instead, our climate is reaching temperatures not seen in millions of years.

And the orcas? What intrigues me about this study is that 40,000 years ago is not the coldest part of the last glacial period. It's the second coldest. There was one seesaw colder. The coldest time was 23-17,000 years ago. If the bottleneck for orca diversity happened when they say it did, there must be another factor involved that they haven't discovered. Finding that factor could be a major key to understanding how species deal with bottleneck situations. The Durham team might be onto something with major implications for managing our current climate crisis.
Posted by John McKay at 10:44 PM No comments: