After lots of procrastination and fussing, I finally sent off the book proposal last night. I'm not sure if I'm relieved or terrified at the moment.
Posted by John McKay at 3:15 PM 1 comment:

A few weeks ago, some surveyors in the Shetland Islands north of Scotland came across an interesting piece of bone. It was about a foot in length, thick, curved and broken at both ends. They thought it might be a piece of walrus tusk, but it was unusual enough that they took it to Val Turner, the island archaeologist. Turner is not a paleontologist, but she knew enough to realize this was not a walrus tusk. She bundled it up and sent it to the Paleontology Museum of Uppsala University in Sweden.

Based on the nature of this blog, I'm sure you can all guess what it is. If I was there I could have told them in less than a minute that it was a piece of tusk from a proboscid, and determined whether it was from a mammoth or a modern elephant (the trick is to look at something called Schreger lines). That is what Uppsala told Turner. 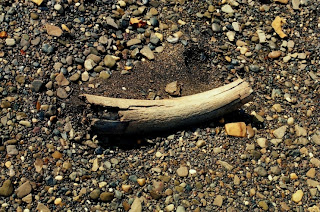 Why is this a big deal? Sections of mammoth ivory are found all over the North and this one is a pretty ratty looking piece. What makes this piece unique and explains Turner's inability to identify is that no evidence of mammoths has ever been seen on the Shetlands.

The islands were completely buried under the ice during the last glacial maximum. Because so much water was locked up in the ice caps the oceans were several hundred feet lower during the glacial maxima. Britain was attached to the mainland and most of the North Sea was dry (or ice covered land). Mammoth ivory is fairly common in England and Ireland and trawlers regularly bring up mammoth bones and ivory from the sea.

This brings up two possibilities to explain the ivory. First, is that a small population of mammoths established themselves on the islands after the ice melted, but before the ocean had risen to its current level. Second, is that this is a piece of ivory washed up from the North Sea during a storm. Hurricane force storms are not uncommon in those parts.

For now, the Shetland Amenity Trust has closed the area where the tusk was found. This week, experts from Uppsala arrived to hunt for other mammoth bones. I'll be watching for follow-up news.
Posted by John McKay at 3:17 PM No comments: