Almost six years ago, I wrote a piece about an early trilobite discovery and evidence of prehistoric and pre-literate knowledge of the nature of trilobites. It was pretty good and was included in The Open Laboratory: The Best Writing on Science Blogs, 2010. Flash forward to this weekend. Catching up on my mail, I found a letter from a museum conservator in Utah asking about the source of one of the illustrations in the post and asking about a higher resolution version of it.

I wasn't very good about linking to the sources of illustrations back then. I have since learned better. Worse, the files and drafts of old blog posts are all on the hard drive of a computer that died about three years ago. I figured it wouldn't be that hard to redo the search I made that found the illustration in the first place. I was wrong. I tried Googling the location where the trilobite in question was found. I flipped to the image page and found several copies of the illustration. All of them linked back to me. This is flattering, but not helpful. 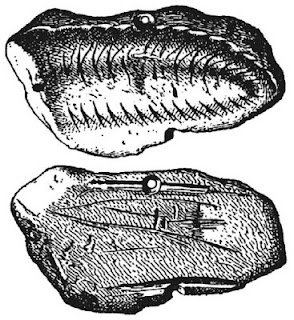 After noodling around for a while, I figured out how to find it. I found a scientific paper that mentioned the discovery (as a bonus, it had a photograph of the fossil). From that I found the name of the discoverer and the French journal that published his original report. I did a quick search to see if I could find it online. I couldn't, so I went Gallica, the site that has scanned copies of books and journals in the Bibliothèque nationale de France. There I had no problem finding the illustration, not in the original journal, but in one a few years later. My Google fu is still amazing. While looking for the illustration, I found out a good deal more about that fossil and decided to share it.

Adrien-Jacques-François Ficatier was an army doctor stationed in Paris during the last quarter of the nineteenth century. He was also an amateur archaeologist. During the 1880s, he spent several summers poking around caves in the Yonne region southeast of Paris looking for artifacts. In 1886 he explored one of a series of caves just upstream from Arcy-sur-Cure. This cave is almost 60 meters long with a thick layer of earth, rich in artifacts, covering the bottom. The lowest layers have been dated to 35,000 years ago--well before the last glacial maximum. Ficatier excavated the two upper layers in the cave which date 14-15,000 years ago. There he found bones of horse and reindeer along with hundreds of pieces of worked flint, four needles, three spears, and several pieces that had been drilled to be worn as pendants. These were a wolf's tooth, four scallops, other marine shells, a beetle carved from pine, and a trilobite.

The trilobite is small--43 mm long and 23 mm at its widest point--and well worn as if it has been handled a lot. There are tiny holes on either side that would have been used to hang it. In 1897, on the occasion of the fiftieth anniversary of its founding, the Society of Historic and Natural Sciences of the Yonne organized a series of excursions to the caves of Arcy-sur-Cure and St. Moré to compliment the usual dinners and lectures. Henri Douvillé, an  influential professor of paleontology at the École des Mines, told the Society that the trilobite belonged to the species Dalmanites hawlei found in Bohemia (the Czech Republic). More recent paleontologists have questioned that identification, but all agree that it was not a local fossil. 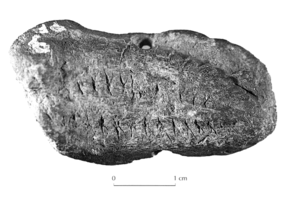 The stratum where the trilobite was found has been dated to about 14,000 years ago. This is after the glacial maximum had passed, but during a sudden cold snap called the Older Dryas. The human culture of the time, called Magdalenian, was originally identified as one of great reindeer hunters. They had an improved set of hunting tools and were using dogs. Of course, they didn't just hunt reindeer. It was at about this time that mammoths died out in Europe.

There was more to their culture than just hunting. They manufactured items for personal adornment. The little trilobite meant something to them. It had enough value that it was a worthy object for long distance trade. What it meant is hard to say. One of the other items Dr. Ficatier excavated that summer might offer some context. The only manufactured amulet is a wood-borer beetle carved from lignite. Like the trilobite, it has holes drilled on the sides, rather than the top, for hanging. In many parts of the world where trilobites were traditionally called some variation of "stone insects". Was the trilobite significant because it resembled a beetle? Were these people the clan of the cave beetle? No one knows. 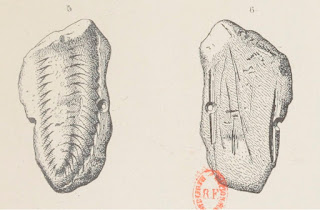 After the summer was over and he returned to his job, Ficatier wrote up his field notes and they were published in a regional journal the Almanach historique de l'Yonne de 1887. It is here that the illustration first appeared. Over the next ten years, it was published in at least three journals that I know of. I've taken my image from the Bulletin de la Société d'anthropologie et de biologie de Lyon. The fossil itself, along with the beetle were placed in a museum in Joigny. Later that collection was moved to the Musée de l'Avallonnais. The museum's displays are mostly of local artists. There is an archaeology room, but I have been unable to determine if the trilobite, or the beetle, is part of the permanent display.

One final note. While looking for some biographical information on Ficatier I found out that a Playboy playmate from the 80's named Carol Ficatier is from Auxerre near Arcy-sur-Cure. I don't know how common the name Ficatier is in that part of France but, if it's not common, there's a possibility that they're related. Fame takes many forms.