"Here be Dragons" and here and here

Robinson Meyer is an associate editor at The Atlantic, where he usually covers the technology beat. I'm not sure that I've read that much of his work, but I'll assume he's pretty good or he wouldn't have been given that job. He is not, however, an historian. In a piece that went up on The Atlantic's website today, Meyer debunks the myth the the legend Hic sint dracones--Here be dragons--was a common legend on old maps. In doing so, he makes some errors of his own.

First, let me quibble about the headline. This is probably not a valid criticism of Meyer. In most popular journalism, the text of a piece and the headline are written by two different people. The headline writer is usually far down the totem pole from the author. The headline and the sub-head of this article are, "No Old Maps Actually Say 'Here Be Dragons.' But an ancient globe does." The globe in question, the Lenox globe, was made c. 1510, which is not Ancient. It's not even Medieval. It's Renaissance, or, as some historians prefer, Early Modern. Like I said, I'm quibbling.

The core of Meyer's article is this:


I'd always wondered: Do any old, original maps actually say those words, "Here be dragons?"

Not a single old paper map presents those exact words--"Here be dragons"--in the margins or otherwise. Nor does any paper map include "Hic sunt dracones," the words' Latin equivalent.

But a globe does.

That's right: One globe—just one...

Look in a good, thorough book on cartographic history and you'll most likely read that the Lenox Globe is the earliest surviving globe to include the New World. It's also one of the oldest surviving globes, period. The Lenox Globe is a beautiful little thing. It's only five inches in diameter, about the size of a grapefruit, and made of copper. Because of its size, the amount of detail it shows is limited. It displays coastlines, major rivers, mountain ranges, and a few dozen placenames. The seas are covered with thin wavy lines which do a very nice job of distinguishing them from the land. Experts think it might have been part of a clock or some other larger display.

The Eastern Hemisphere of the Lenox Globe shows a moderately accurate Europe and Africa and a strange, too-large Asia. On the south coast of Asia, the Persian Gulf, well-known since antiquity, is there. Further east, India, though a bit squashed, is also there. Beyond that, another peninsula is in the right place for Southeast Asia. Beyond this, is an enormous peninsula that hooks down into the Southern Hemisphere and westward toward Africa. This is sometimes called the Dragon's Tail. It is a relic of Ptolemaic geography which made the Indian Ocean a landlocked mirror of the Mediterranean Sea with its southern coastline near the Tropic of Capricorn. In the 1490s, Vasco de Gama and other Portuguese mariners rounded the Cape of Good Hope and demonstrated that the Atlantic and Indian Oceans were connected. Conservative mapmakers took this to mean that the western side of the Indian Ocean was open, but used the Dragon's Tail to continue to enclose the eastern side. 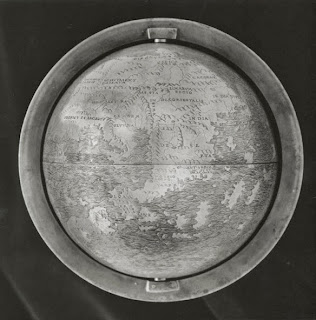 Asia on the Lenox Globe. Source.

Because no living European had yet visited the Dragon's Tail, mapmakers drew on Marco Polo for names to populate it. After the Dragon's Tail vanished from maps, the names gradually migrated south, through Indonesia, to Australia, and onto the Unknown Southern Continent. Sadly, when it came to naming parts of Antarctica, no one revived these names. The Lenox Globe has one addition to the Polo (Polonian?) names on the Dragon's Tail. Just below the Equator, it has the phrase "HC SVNT DRACONES." Here be dragons. B. F. de Costa, who wrote one of the fist scholarly papers on the Lenox Globe, thought the phrase referred not to actual dragons, but to one of the people mentioned by Polo, the Dagroians. If that's the case, it would be the only nation mentioned that way. All others simply have their names. Scotland simply says "Scotia," not "Hic sunt Scotii." I'm inclined to think the anonymous cartographer who designed the globe really meant dragons, though what he meant by dragons is another question.

Earlier this year, a second globe with the inscription came to light. This globe is a duplicate of the Lenox Globe, with the difference of being carefully cut into the surface of an ostrich egg and painted.  The owners agents say the tests they've had done on the globe show that it's authentic and they believe that it was the model for the Lenox Globe and not the other way around. If right, this makes the egg globe the oldest globe with a representation of the New World. 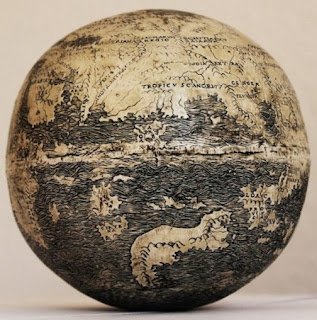 Asia on the Egg Globe.Source.

That makes two "here be dragons." There is a third. Thirty or forty years before the Lenox Globe was made the words appeared on an allegorical T-O map in book 4 of Jean Mansel's La Fleur des Histoires. The lettering on Mansel's map is in gold leaf and I have not been able to find a legible image to share with you. I believe the phrase "Hic sunt Dracones" is the inscription to the left of the Ark above the golden dragon in the forest. 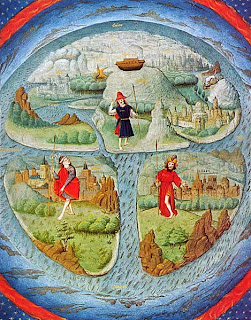 Jean Mansel's allegorical map of the three parts of the world. Source.

Meyer has not been derelict in his research. The statement that the Lenox is the only period map containing the words "Hic sunt Dracones" appears in a number of authoritative places. The egg globe is new enough that is hasn't yet made it into the literature. Mansel's map is something that I have only seen twice, both from the same author, one of which is a mere footnote*. I'm only in a position to correct Meyer because I stumbled across these references while looking for something else. That something else is the Waldseemüller walrus (morsus) that Meyer also mentions in his article, giving me a convenient opening to show off my knowledge of map animals.

I've written about Waldseemüller's morsus elsewhere, so I'll just give a quick summary here. Martin Waldseemüller is best known for his 1507 map of the world, which was the first to use the word "America" to describe the New World. This, by the way, is one of the brackets used to date the Lenox globe; it could not have been made before Waldseemüller's map. Waldseemüller's next map of the world, the Carte Marina of 1516, is less well known, but equally fascinating. West of Norway, on what appears to be dry land covering the North Atlantic, is the image of a large animal with an elephant shaped body and legs, but hooves. The head has fan-shaped ears, like an elephant, but no trunk. It has two short tusks that rise from the lower jaw like those of a boar. Next to the image is a caption that reads "The morsus is an elephant-sized animal with two long, quadrangular teeth. It is hindered by a lack of joints. The animal is found on promontories in Northern Norway where it moves in great herds (My translation)." 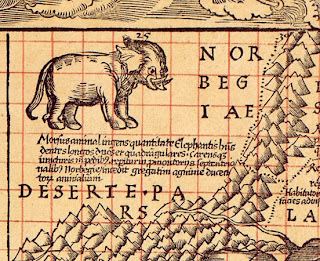 Morsus (morse, morzh) was already well established in several European languages as the name for walrus by Waldseemüller's time, but reasonably accurate images of the animal wouldn't be in circulation until the 1550s. A big animal with tusks that lives on the north coast and moves in large numbers is not a completely bad description of a walrus. However, Waldseemüller's description of the morsus includes something very non-walrusy. That bit about having no joints is something right out of natural histories of Classical Antiquity. It was frequently written that elephants had no knees. Despite the efforts of a few writers like Aristotle to correct the world, this myth persisted right up to Waldseemüller's time. Does Waldseemüller's morsus indicate some knowledge of the mammoth? Two years ago, I wrote that I believe it is possible that it does. My more recent research for the book makes me up that possibility quite a bit.

This is not a deeply thought out essay. It's just something I whacked out after seeing Meyer's article. It was a nice break from my otherwise endless anxiety attacks this month.

* The author is Chet Van Duzer. The most accessible place to read it is in his new book, Sea Monsters on Medieval and Renaissance Maps, p. 61.
Posted by John McKay at 4:48 PM