Fifty years ago, Seattle was the host of the Century 21 World Exposition, better known simply as the Seattle World's Fair. Century 21 was one of those quaint imperial propaganda exercises during which one of the Great Powers tried to dazzle the rest of the world with its technology and vision of the future. When Dad loaded Mom, my sisters, and me into our 1957 Volkswagon Microbus to go to the World's Fair, I didn't care about any of that; all I knew was that John Glenn's space capsule was there and that I was going to see it. 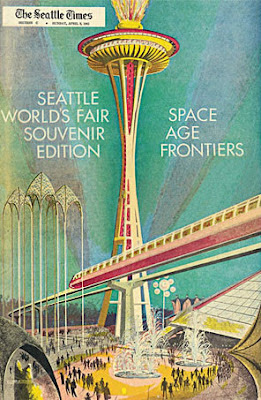 Source.
Unless your name is Jules Verne, predicting the future is a thankless business. Prognosticators almost always expect too much in the short term and not enough in the long term. Whatever else they get right, they never, ever manage to see what's happening to social and cultural mores. Again, like most of these imperial exercises, the Seattle World's Fair depended on its sponsors--civic boosters, corporations, and the government--to create its vision of the future. They made a conscious decision to ignore the people who had spent the most time thinking about the future, science fiction writers. Robert A. Heinlein and Isaac Asimov were both approached to pitch projects for the fair and both were rejected. Not that they would have done a lot better; despite Bob's most earnest hopes, hot young women still do not cluster around smart guys to form polygamous communities.

Still, the Fair boosters and magazine writers of 1962 did their best at envisioning The Future. It's only fair (get it?) that The Future send back a score card.

This is The Future speaking. You spent a lot of time thinking about me lately. I'm touched. Let me tell you what's happened:

We never got jet packs, flying cars, or a four day work week.

Most women have jobs outside the home and they wear pants.

The Cold War ended without a Third World War. Our side won.

The president is a black man named Barak Hussein Obama. The governor of Louisiana is an East Indian man named Piyush Jindal.

Rock and Roll is still not dead.

We still haven't cured the common cold, cancer, or almost any disease you expected us to. We even have some new diseases.

The last pope was Polish. The current one was a Hitler Youth.

In most cities you can choose between 500 television channels to watch on your pocket sized, color teevee.

It's common for men to wear earings and women to have tatoos.

The Americans were the first to put a man on the moon. We were also the last. It's been almost fifty years since anyone has been further than about two hundred miles from Earth.

If we had another race to the moon, China might win.

The Solid South is solidly Republican.

The most popular cars in America are made by Japanese companies.

Middle aged people still complain about the music of teenagers.

Computers are everywhere and they are like nothing you expected. In many ways, they are far cooler.

The air quality in our cities has improved.

House cats wear laser collars that vaporize mice on sight. OK, I made that one up. We could probably do it, but think about what would happen to your apolstery.

Homosexuals--we call them "gay" now--can get married in eight states.

The tallest building in the world is in Arabia in a country you've never heard of.

Americans are still really bad at geography and history.

Atomic energy had some unforseen problems. It's never going to replace other kinds of power.

We finished the Interstate Highway system and now we're letting it fall apart.

The latest generation of Americans is not much taller than you, but they are much fatter.

You know all that talk about the inexhaustable food resources of the ocean? We exhausted it.

My car has more computing power than your Pentagon.

The bald eagle and the California condor did not go extinct, but the rhinoceros and the tiger might.

We have lots of robots, but most of them look more like table-saws than people.

We can't control the weather.

Pills instead of food was a stupid idea. People like food.

The Space Needle is still there. We're quite fond of it.